Of course it totally sucked not to skate and the lack of pool. ECDX pool has always been an amazing experiance, I will always rememebr when Montreal had a little danceshow for us. And talking about Montreal, their spacewolf pants this year are aaaamazing! Keeping the dream alive.

It was real fun to see Tiger Bay, Helsinki and of course Crime City play, it's so amazing and awesome to see how well  European teams are performing, and proving over and over that Europe is underanked. Victoria from Australia showed that they very much deserve the ranking that they are at.

Crime City vs. Providence was REALLY exciting, I am SO impressed over how they kept it together and played well, despite that Juciy, one of their skaters, broke her ankle in the game the day before.

Other games that were ttally worth watching were Montreal and Terminal City that played a tight and superexciting game, Gotham vs. Philly that was a little tigher than I would have assumed, but freaking LOVE to watch Slaydie and Diva go at it. The clash of the Titans! And damn Bonnie, she's just sort of "OK guys, I am just gonna stick myself between you and slide by". Impressive and lovable!

I also had a good time just haning out with friends talking about rollerderby, watching rollerderby and having a few beers. I was stayng with OMG and Bonnie and even if they were playing I think I was the first one to fall asleep. I've become such a sleeper the past year... Sleeping is goood for you!

Today I'm going to practice and I am very excited about it, YAYAAAAA... I gotta go rollerskating... Tomorrow I think I am gonna go outdoor rollerskating, I miss it! Just skating up the West Side High Way on Manhattan is SO MUCH FUN!! (fuck running, when you can skate) I once made Trish do it with me, and she got the worst blisters, so my mission is to get her a pair of better fitting skates... 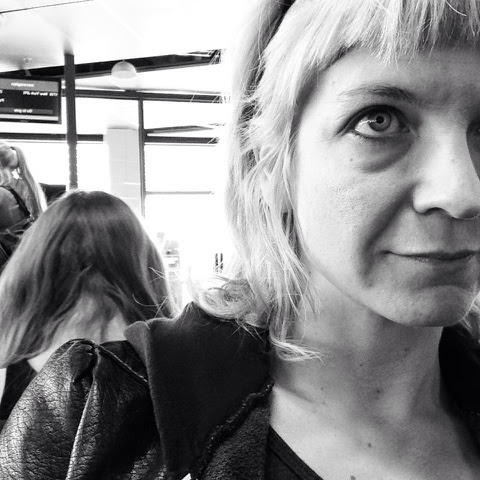 running start by Swede Hurt at 6:10 PM No comments:

Been in NYC for a few days, really been feeling quite crappy and tired... Haven't done much but hang out with OMG and Bonnie, been to a practice and watched soccer with my Colombian friend Sunny... yeah... good times! Oh, and of course I got to see one of my best friends Only who is in town with Helsinki ROllerderby.

Today I'm heading towards ECDX in Philly, more about that after this weekend. But in short hand I get to see Tiger Bay, Crime City and Helsinki Rollerderby play american teams. It is always awesome to see how European teams fare in USA, since we all seem to be quite underanked.

I am bringing my skates, but with outdoor wheels and my running shoes, after feeling crappy for a few days I just can't wait to work out again.

running start by Swede Hurt at 3:39 PM No comments:

Wednesday  I was coaching my last Stockholm practice in quite a while, i am heading to USA on Monday, staying there until I go to Stuttgart to play Team USA and then to head back to Sweden to play the Swedish Champs!

Yes, life is fun and busy!

Practice was for our more advanced skaters, and I planned a bunch of things that we need to improve, getting lower, blocking backwards and then turn around and keep the jammer on the ass, bracing, stay together and use plows to slow a pushy jammer down, keep your core strong, toe stop work and then the darn hockey stops. I always also try to throw in some endurance and some skating in the opposite direction at every practice.

When I coach I alternate between coaching skills I'm good at and things I need to improve. Being the coach it's not always fun to fall on your ass every time you are trying to demo hockeystops the way you suck at it. At the same time, if I don't I will never improve... and at least when you fall you know you are trying hard. Yesterday really was lots about skills I need to improve, and I guess the rest of the league also get to improve.

My new task is to become a better jammer, so lots of footwork in my future, I am not a fancy spinner, I am a dumb "I will get through here" sort of jammer. So maybe I will try the fancy spinner a little more, be good for me.

I just got a set of new Juice wheels that I tried out, and I really liked them from the get go. Durometer 95 worked really well on the dirty concrete surface we skate on during the summer.


running start by Swede Hurt at 9:25 AM No comments:

Fifteen skaters, a track, a deadleg and a musicvideo

Monday was a looong day at work, fun, but lots of new things. I am currently working on a project for SQORE. If you are competative in academics, this is really something to check out! Just do it! ok?

Yesterday due to most ppl were a little derbyout after the weekend (BSTRDS played in Barcelona and Team Sweden had practice) we only had 15 people able and willing to scrimmage. And it was fun, everyone got to jam, and play with each other. Having to go in two jams in a row, or even three and then sit one just ot be able to jam, it does wonders for your endurance, my way of reducing having to run, run, run....

But what is cool too, is that about just two years ago, 15 people at practice would have been considered a well attended practice...

I had tons of fun, even if I was feeling a little stressed in the beginning of the scrimmage, running out of work straight to practice while chewing down food does that too you. There something about practice, I don't know if it's because rollerderby is hella fun or because of all the endorphines, but in 99% of the cases I leave practice feeling 100% better than when I came there.

I got a pretty bad "Charlie horse" already on Sunday, but it did only get worse after another bony/muscular ass to it... damn derbygirls I urge you all to eat some more fat so your hits become fluffier and less painful on me! Seriously, I can barley walk today, and tonight is fighting fit! I am taking tomorrow off, and that is probably a real good thing. Sometimes you need to take a deep breath and just take it easy.. .this might not really be what I do, but I am saying... sometimes it is for the best.

After practice I stuffed my car full of ladies... well I stuffed five girls into my volvo, to go and skate back and forth on a bridge for some musicvideo that Amy is in. It was odd but both fun and funny. And then I went home, made a HUGE sallad and watched Penelope. darn, it's the cutest little freaking romantic comedy I've seen in a long time!
HIGHLY recommend it, partly because I think that Christina Ricci is adorable, but the story is for sure really cute (predictble, but cute, and what RomCom is NOT predictble).

running start by Swede Hurt at 1:16 PM No comments:

This weekend was superduper intense, I totally nejoyed it, but I was also so exhausted yesterday that I fell asleep 21.30 and slept like a baby until 06.30, still wearing my clothes. Yepp, that is how life is, in all sorts of ways.

On Satuday we met in the morning and did drills until lunch, and after lunch Glory and Fenix ran a bunch of drills with us. It all turned out to be a really great overall practice. I'm starting to feel like I know the other skaters better and better and our strides start to gel. We start to recognise each others voices.

We went over a bunch of termology, so we all understand what we are talking about when we are on the track, since we all come from different leauges and have different names for walls and offense.

After practice we all went to Vinterviken (the infamous derbycommun) and had food and watched the Philly vs. Texas game from Big O, and of course soem of the SKOD tournament that was going on during the weekend. Texas really are GREAT at playing offense without sacreficing too much of their defense, really a joy to watch them play!

On Sunday we started off with some off-skate before suiting up for some more wallwork ran by Glory and then lunch. After lunch we had the fortune to have reffs to come and join us, and we were able to scrimmage. Scrimmage went quite well, and we really got to put some of the things we had worked on during practice to use. It's frustrating that we are so good ;-)

I know I say this a lot, but it truly is amazing to think how far Swedish Roller Derby has come the past years! It makes me really happy, and more and more willing to push myself and coach others, because it DOES show results.

running start by Swede Hurt at 3:56 PM No comments: